To build, automate, and deliver mobile apps as well as microservices, Gradle is one of the best solutions on the market. It is a build automation tool that controls the development process. However, there are alternatives to Gradle, including Apache Ant, Please, GNU Make, and Apache Maven.

Additionally, packagecloud can also be a perfect Gradle alternative. Packagecloud is a cloud-based service that allows sharing software packages. It enables users to manage packages regardless of OS or programming language.

You should sign up for the packagecloud free trial.

Gradle is a build automation tool that performs compilation, packaging, testing, deployment, and publishing. It supports several programming languages, such as Java (Kotlin, Groovy, and Scala), C/C++, and JavaScript. Gradle operates according to a series of build tasks that run serially or in parallel. Two of Gradle’s major features are Gradle Build Cache—a build cache—and Gradle Build Scans—a web-based build visualization tool. Gradle is open-source software under the Apache License 2.0. The build tool was initially released in 2007.

Gradle is high-performance software because it only runs required tasks. It also provides a JVM foundation if you have installed a Java Development Kit (JDK). Gradle builds can be imported to popular IDEs such as IntelliJ IDEA, Android Studio, NetBeans, and Eclipse. It also supports generating the solution files which are required to load a project into Visual Studio. To identify build issues, you can use build scans, which provide much information about a build run. It also allows sharing build scans with others.

With Gradle, you can build any software. Its dependency management supports Maven- and Ivy-compatible repositories and the filesystem. You can easily build common types of projects. You can also create and publish custom plugins. Gradle uses Directed Acyclic Graphs (DAGs) of tasks to model its builds. It means a build based on dependencies configures a set of tasks and wires them together to create that DAG. 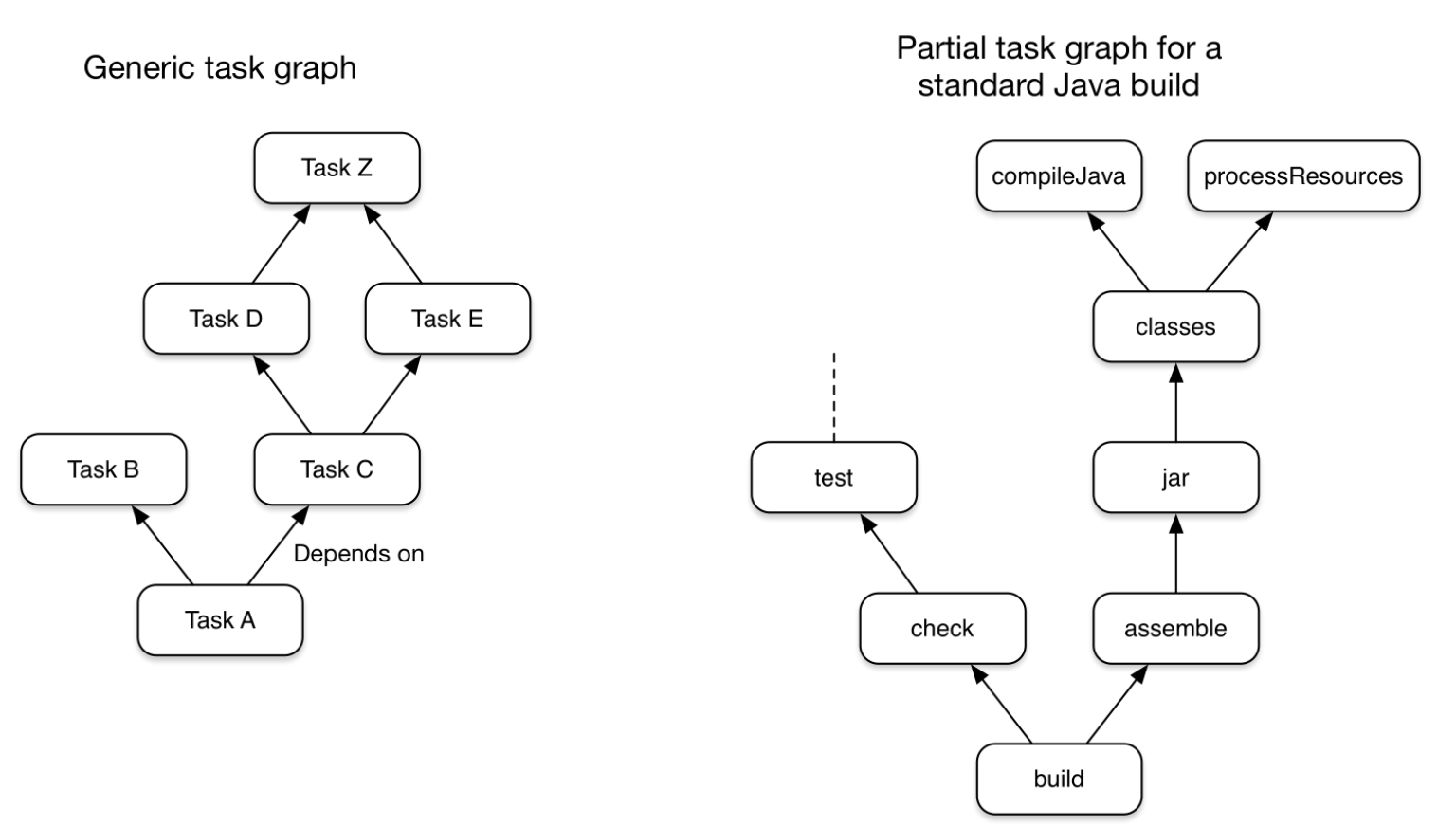 Gradle includes fixed build phases to evaluate and execute build scripts—initialization, configuration, and execution. In the Initialization phase, Gradle sets up the environment for the build. After that, it determines which projects will take part in it.

In the configuration phase, it constructs and configures the task graph for the build. After that, it finds out which tasks need to run and in which order.

In the execution phase, it runs the tasks selected at the end of the configuration phase. Well-designed build scripts include declarative configuration rather than imperative logic.

To build your project, you need to add custom build logic. To extend, you can use several mechanisms, such as custom task types, custom task actions, extra properties on projects and tasks, custom conventions, and a custom model. In custom task types, you can write your own task type when an existing task will not do.

With extra properties, you can add your own properties or tasks to a project. To simplify builds, you can use conventions. You can add new concepts into a build beyond tasks. Build scripts work against APIs. They describe what steps are needed to build the software.

Other emphasized features of Gradle are easy migration from other systems, a highly extensible scripting model, rich dependency management, and a tightly integrated plugin system. Gradle is mostly used in the JVM environment.

There are many good comments about Gradle from experts who work in famous companies such as Google, Netflix, LinkedIn, and Wisercare. For example, Justin Ryan, who is a Senior Software Engineer at Netflix, stated “We do truly feel that Gradle is the best build system for the JVM…” on the official website of Gradle.

Another Senior Engineering Manager at LinkedIn, Jens Pillgram-Larsen, said “At LinkedIn, we want to radically change the definition and eliminate these deficiencies in the system both when it comes to releasing software and developing software every day. There is a lot of buzz around continuous delivery and deployment and I think Gradle is instrumental on the development side, on the micro-level, and the day-to-day on how we can eliminate the deficiencies in the system.”

Martin Cron, who is the Lead Developer at Wisercare, is also satisfied with Gradle, commenting “Keep up the great work. Gradle is one of my very favorite tools, and finding a developer who doesn't yet use Gradle is like finding a movie fan who hasn't yet seen The Godfather—'Oh my God! Stop everything and watch this!’”

Gradle is constantly being improved by developers for efficiency, speed, and performance. That is why there are 80,000+ monthly Gradle newsletter subscribers. Gradle is one of the top 20 open-source projects. It is also trusted by millions of developers to create software applications for billions of people.

Packagecloud is a great choice as a Gradle alternative. Packagecloud is a cloud-based service to distribute software packages quickly, reliably, and securely without owning any infrastructure. In one repository, you can keep all of the packages that are required by your organization without any concerns about OS or programming language and efficiently distribute them to your devices. This saves users time and money by efficiently, reliably, and securely setting up servers for hosting packages and updating machines with less overhead.

You can try the packagecloud free trial to see how easy it is to distribute packages across your entire organization. With packagecloud, you don’t need to worry about the consistency, scaling, and security of your packages.

Apache Maven is a build automation tool for building and managing software projects. With the concept of a Project Object Model (POM), it can manage, report, and document a project’s build in central definition files. Both Gradle and Maven use parallel project building and parallel dependency resolution. Among their differences, a big one is that Google owns Gradle as the official build tool for Android. Both Gradle and Maven support convention over configuration. While Maven provides a very rigid model which makes customization tedious, Gradle is built with an empowered user in mind.

To use these convenient features, check out packagecloud. You can create a Maven repository in packagecloud in 10 seconds for free. You can also deploy Maven from our build tools.

Bazel is a free software tool to automate the building and testing of software. Using a set of rules which are created in the Starlark language, Bazel builds software applications by source code. It can make software application packages to be deployed on Android and iOS operating systems. With Bazel, you can build and test any software application of any size quickly and reliably. Bazel emphasizes several features such as correctness, performance, and reproducibility: Bazel tries to produce correct output; it executes tasks quickly; and any part of a build can be reproduced anywhere. The difference between Gradle and Bazel is that Gradle concentrates on flexibility and non-obtrusiveness to build a structure, while Bazel focuses on reliability.

Gradle is a powerful automation build tool that is compatible with the major programming languages, such as Python, Java, and C++, among others. With Gradle’s rich API and plugins as well as integration capabilities, you can easily achieve build automation. Despite the features, since Gradle is an open-source project, it can be demanding to start on your own.

Consider packagecloud. It is a cloud-based service that allows users to distribute and manage software packages with minimal effort.

Sign up for the packagecloud free trial to see how easy it is to distribute packages.

This article covers how to use private Maven repositories in Packagecloud environments.

If you want to achieve 10x Java performance improvement, check this article to teach you how to use strace.

Check this post to learn debugging SSL in Java using mitmproxy covering from configuration to implementation.